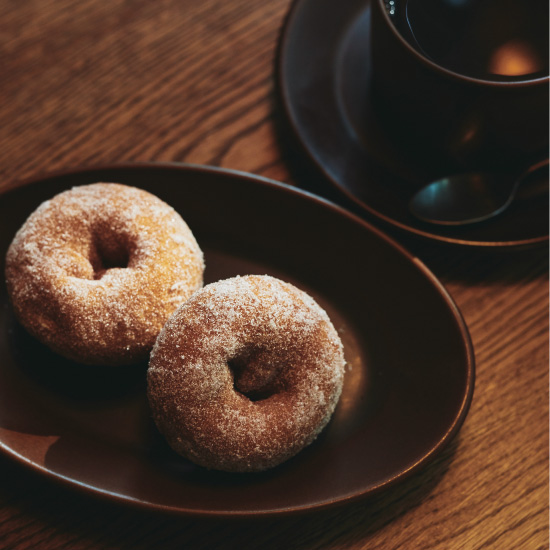 On my first trip to Noosa I'd seen a doughnut machine in action outside a supermarket. I'd stood, with Kentaro and Hiromi, our noses pressed to the glass, watching it in operation. Seeing the dough drop into the hot oil, flow along, do a flip halfway, ascend the little escalator and finally drop into the draining basket. After seeing this, we longed to own one. It was, of course, an absurd idea. No house needs a doughnut machine. "Don’t you need one for Kentaro Studio?" I often half-seriously suggested. "No, you need it for TRUCK." he replied, joking. This back and forth went on for six years, and every time we went back to Noosa, we went to see it.

When we relocated to Asahi Ward with our newly-built TRUCK store, no matter what, we wanted to make a place for customers who came to be able to take a break and enjoy a coffee.
I briefly considered setting up the doughnut machine and a vending machine, but I soon realized that I'd need someone to operate the machine. I decided that if I was going to do it, I wanted to do it properly. I abandoned the idea of setting aside a corner of the shop and set about planning a proper café. In addition to coffee and doughnuts, we would have good food, good beer and good wine.

When it came time to start buying equipment for Bird we had a bit of a shock. The estimate for all the stoves and burners and cooking utensils was lower than we had expected. The price of the doughnut machine was not. In fact, although we had chosen the smallest model it would cost more than all of the other kitchen equipment combined. I started to have doubts about how wise it really was to buy this machine. How many doughnuts would we have to sell just to make our money back? I wondered if it made sense to spend so much money on just one thing.
Hiromi said, "The other equipment is cheaper than we thought it would be. That's why we can buy the doughnut machine."
We finally had an excuse to buy the machine we had wanted for the last six years. In the end I had to agree with Hiromi. We decided to buy it.

To create the dough for our doughnuts I again turned to Takeuchi. I described the kind of doughnuts I wanted to make and he started experimenting with different kinds of flour and oil to create the kind of thing I was looking for.
One problem we had was that Takeuchi was an expert baker. When he makes something, he considers dozens of factors and variables. He might choose different amounts of each ingredient depending on differences in the temperature or humidity. Even how the dough is mixed can have a big effect on the final product. There were some kinds of flour that were full of additives that we could have used to be able to make a dough recipe that anyone could follow. But we chose not to. Once he had come up with what we agreed was the doughnut we were looking for, he set about training the Bird staff in how to change and adapt the recipe depending on the day. Thanks to his hard work and the dedication of the Bird staff, we were able to do it.
On the outside, Bird doughnuts may look plain and old-fashioned, but on the inside, they are much more than that.

Bird doughnuts are specially crafted with:

- Carefully-selected wheat from Hokkaido
- Sugar from Okinawa-Awami sugarcane
- Salt made from a traditional Okinawan method
- Eggs from chickens raised on lush green farms and homemade organic feed in Hiroshima
- Unscented sesame oil that is very resistant to oxidation, which means that even over time, our doughnuts retain their moist and fluffy texture.

(“Boulangerie Takeuchi” has since moved to Hyogo prefecture and been renamed to “Namaze Hutte,” where it continues to make more and more delicious and new flavors.)